We have an exciting guest for you today. We asked her some tough questions to get to the heart of a great book by an even more awesome author.

Thank you, Kristal, for hosting me today. You must be so excited about YOUR new release. I hope you drop by and visit me very soon!

1. Did you always want to be a writer? If not what did you want to be?
Writing never crossed my mind even though the bulk of my early work years focused on correspondence, press releases and even speech writing. I guess I was prepping for this and didn’t know it. When I was young, I wanted to marry Prince Andrew, command armies or become the Prime Minister of Canada. After graduating school, I took my place behind a reception desk—the first of many. 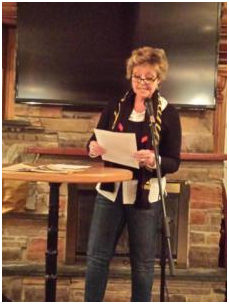 2. When did you first consider yourself a “writer”?

When I gave my first reading at an open mic nite. It was in a bar and the audience was full of

authors, many already published. When they laughed at the right moments and for the right reasons, that told me that I was on to something. That’s when I felt ‘real.’

3. How long did it take to get your first book published?

Not long. Fate kinda intervened. I had four manuscripts under my belt and that’s when a friend put me on to #pitmad on Twitter. I got hits right away, and through these initial contacts I was compelled to hone my synopsis, elevator pitch and query letter. By the third pitch party, I had over thirty tags and log lines. Solstice Publishing found me soon after.

4. Do you do another job except for writing and can you tell us more about it?
I’m a licensed funeral director which means I arrange and take out funerals. I’m an embalmer as well. Three years ago, with the support of my family, I took a break from full-time work to concentrate on my writing. That really paid off. I maintain my license and am on call.

5. What is the name of your latest book, and if you had to summarize it in less than 20 words what would you say?

HEUER LOST AND FOUND is my debut and is the first in a seven volume series. The elevator pitch is as follows: Dead cooze hound lawyer trapped in a funeral parlor relies on boozy undertaker and wise cracking spirit guide to set him free.

6. Who is your publisher? Or do you self-publish?
I’m with Summer Solstice, a division of Solstice Publishing out of Farmington, Missouri.

7.How long does it usually take you to write a book, from the original idea to finishing writing it?

The first book took thirty years. That is to say it’s the sum total of life experience and a ton of observations. The writing, learning, editing, honing took five years and is ongoing. For the subsequent three manuscripts, it took about a year for each of them to get to a cogent first draft. I really have my groove on, you might say.

8. What can we expect from you in the future?  ie More books of the same genre? Books of a different genre?
My tastes range from campy to philosophical to romantic to paranormal. I also have a taste for classic cars so it’s not unusual to find a car character or two in my work, and it’s amazing how technical jargon can be adapted to comedy. My next three years will be devoted to readying the following three manuscripts in the series: SCOOTER NATION, THE HEUER EFFECT, and POOR UNDERTAKER. Each on its own is meritoriously direct in conveying a number of my favorite themes all within the framework of the funeral parlor, which changes hands as the decades pass and in one instance, actually becomes a Euro style resto bar and grille. The cool thing for me as the writer is that there’s some overlapping which I really love. A character that dies at the end of book three is born on page two of book four. For that, I have Quentin Tarantino to thank: PULP FICTION taught me that I don’t have to stay linear.

9. What genre would you place your books into?
I describe them as adult, paranormal, contemporary fiction with a hint of gonzo. Amazon has placed HEUER under Occult, Horror and Humorous Fiction which also works. 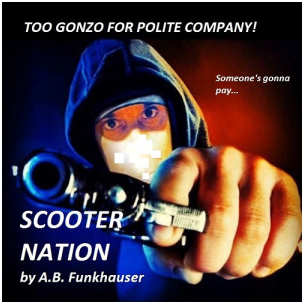 10. What made you decide to write that genre of book?
I like to blame it on the characters, but in truth, I think the comedic elements were a response to a need to give the reader a break from some of the tougher scenes. The protagonists coming to grips with their life situations, I’m told, could be quite visceral and I must have felt that while I was writing it. Death and mourning are serious subjects, but I didn’t want the story to weigh the reader down with every chapter. There had to be a lightness to it to let the reader know that something was going to give.

11. Do you have a favorite character from your books? And why are they your favorite?
I love them all, but my villains seem to demand the bulk of my attention. One, for example, got her own book because the beta readers insisted on it. Why is she this way? What happened to her to make her such? It was amazing the through this exploration, she went from a cartoon to a flesh and blood human being capable of commanding sympathy and understanding.


How long have you been writing?, and who or what inspired you to write?
I’ve been writing fiction for a little over five years now and I have to give the credit for inspiration to trial and error and having the courage to put a foot out the door every day. I’ve failed at many things, but I’ve had a few successes too. The best way to make sense of it was to put it into words and have those words spoken through the mouths of fictional characters. I’m grateful to them for that!

Thank you for stopping by A.B. Funkhauser  it was a pleasure to have you on my blog! Before you all leave then please remember to subscribe to the blog for more features and reviews!